On June the 5th, a group of hardy beach cleaner-uppers tackled the massive job of clearing up debris from our beach. Not only did this hard work make our beach look great, it also prevented much of the man-made rubbish from going back into and contaminating our oceans, as well as harming our marine wildlife.

Thanks to Sam Capell for his fantastic report.

Saturday morning marked the third beach cleanup we have had at Newport in association with Take 3 for the Sea, and the first we have had with the partnership of the Four Pines Newport crew, with Jamie and Phoebe both coming down to the beach. They were fantastically involved in this venture, setting up tents and establishing marked buckets for all the rubbish. They even generously donated cold drinks to all the people who helped out, so we are very much in their debt. We had a great diversity of people helping out, from some of the youngest Nippers of our club to long established members and competitors-it was fantastic to see everyone working together for this common cause. Big thanks to Guyren Smith for operating the ATV for us even after a long morning of IRB training.

In terms of rubbish, we had a monstrous haul, with some very unique items to say the least!

We found a boat pontoon on the south rocks, a full couch near the Peak, and a barricade left over from council work at the stormwater at the north end, as well as all the plastic, bottles, Styrofoam and cigarettes we usually find.  It’s obviously very regrettable that all this rubbish was there in the first place, but highlights the importance of disposing of rubbish properly.

The long-term effect on the marine life with this rubbish scattered along the foreshore can be disastrous,  but it was great to see how thorough all our helpers were! Hopefully we can do another soon. 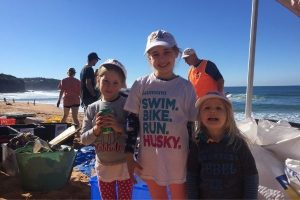