The 14 strong team competed in 52 races over two days and made it into 8 finals to secure the 23 points.

The highlight of the weekend was making the final of the Open Female Teams. This race requires two female drivers and two female crew. This is the first season that Newport has had the depth to be able to compete in this event and to make the final was a fantastic result.

Our U23s were quick all weekend, getting in three finals from their four events. They only missed out on the fourth due to a costly misplaced toe on the start of the semi-final.

Only one “old man” injury was recorded but it didn’t stop the old stalwart securing a one legged 4th in the 45+ years tube rescue.

The new members to the team Zach Van Dam and Tom Doyle had a great weekend of racing. Both made a massive contribution in their first state premiership events for Newport.

The team are looking forward to the next round on the 18th and 19th May at The Lakes SLSC when the ongoing growth of the team will add more depth and see us competing in the hotly contested IRB relay. This race is a combination of all events run back to back and requires 16 competitors in the one race.

Big thank you to Kieran, Adrian and Liam for officiating over the weekend. 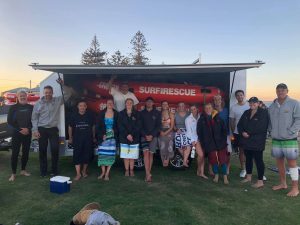