Last Sunday the mighty Sea Eagles thumped the St George Dragons in a 34 – 14 drumming at Lottoland Stadium. Having delivered the winning bid at the recent Newport SLSC – Beyond the Beach – Cancer Council fundraiser the Hayes had front row seats, but with a twist. They were right in the action at halfway, in the Manly Dugout, close to the field and all the action. Thanks to URM for providing an unforgettable experience and supporting such a great cause.

Carolyn explained “Our group of 4 were so close we smelt the menthol rub and heard the impact of crushing tackles and felt the hard hits of Rugby League. The action on the field is matched by what was happening off the field on the sideline in front of us, including players warming up and receiving treatment and cheerleader’s banter.”

Tony got to watch head injury assessments, as well as the trainers and water carriers’ impact on the game. He heard the TV commentators confer with statisticians on counting tackles and metres gained. All useful skills and knowledge he’ll bring back to his role as Patrol Caption for the mighty Newport patrol 8.

As an extra treat they got to watch Manly superstar Tom Trbojevic signal he is back and unhindered by injury after the Sea Eagles’ No.1 put in a dominant individual performance in Sunday afternoon’s six-tries-to-two rout.

The smiles of the local juniors playing at half time and cheering on their idols capped off the day.

Carolyn summed it up “The experience was a prize from the Beyond the Beach Fundraiser held by the club in April, all made sweeter with a convincing Manly win of 34-14 against the Dragons.” 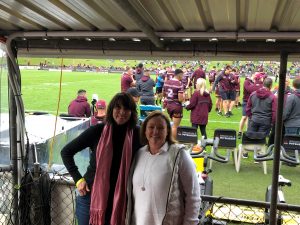